Chemical evolution of the interstellar medium is tightly coupled with its hydrodynamical and thermal evolution. The rates of chemical reactions depend sensitively on the density and temperature of the gas. Molecular cloud cores with different magnetic field strengths, angular momenta, and initial density profiles have different hydrodynamical evolutions during gravitational collapse. The observed variations of chemical properties might be caused by their respective hydrodynamical evolution inside each of the cores. Hydrochemical modeling of the star formation process may help with the insights into the origins of the observed differences. Our efforts on chemistry in star formation processes branch out into the following two major directions.

A two-dimensional hydro-chemical hybrid code, KM2, is constructed to deal with astrophysical problems that would require coupled hydrodynamical and chemical evolution. The code assumes axisymmetry in the cylindrical coordinate system and consists of two modules: a hydrodynamics module and a chemistry module. The hydrodynamics module solves hydrodynamics using a Godunov-type finite volume scheme and treats included chemical species as passively advected scalars. The chemistry module implicitly solves non-equilibrium chemistry and change of the energy due to thermal processes with the transfer of external ultraviolet radiation. Self-shielding effects on photodissociation of CO and H2 are included. 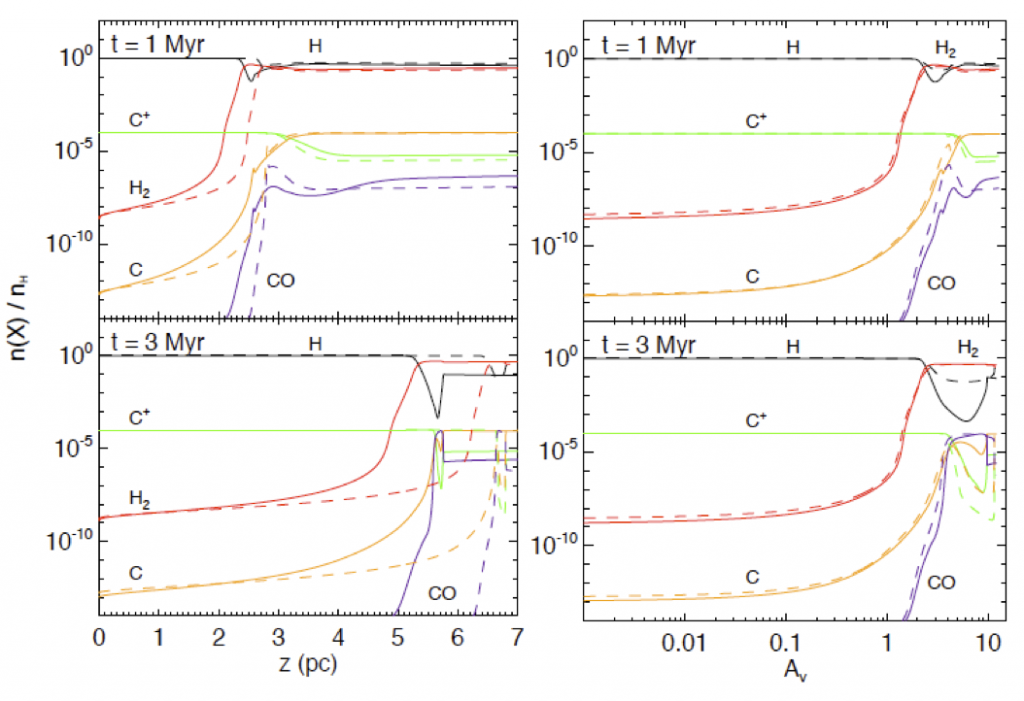 Numerical simulations (KM1) were conducted to calculate the density and temperature profiles of a magnetized bright-rimmed cloud irradiated by far-ultraviolet (FUV) photons from the nearby high-mass star. The results were compared with the Nobeyama observation of a bright-rimmed cloud SFO 22 in Orion.