Distinguishing diagnostic observational signatures produced by MHD models is essential in understanding the physics for the formation of protostellar disks in the ALMA era. Developing suitable tools along with time evolution will facilitate better identification of diagnostic features. With a ray-tracing based radiative transfer code Perspective we explore time evolution of MHD models carried out in Li et al. (2013) — most of which have 90◦ misalignment between the rotational axis and the magnetic field. Four visible object types can be characterized, origins of which are dependent on the initial conditions. Our results show complex spiraling density, velocity and polarization structures. The systems are under constant change, but many of those distinctive features are present already early on, and they grow more visible in time, but most could not be identified from the data without examining their change in time. The results suggest that spiraling pseudodisk structures could function as an effective observation signature of the formation process, and we witness accretion in the disk with eccentric orbits which appear as spiral-like perturbation from simple circular Keplerian orbits. Magnetically aligned polarization appears purely azimuthal in the disk and magnetic field can lead to precession of the disk.

Models of Clear Spiral (CS-type), Leaking Spiral (LS-type), Looped Axis (LA-type) and Looped Plane (LP-type) viewed from above, from a 45-degree angle, and from side, from top to bottom, respectively. The former 3 models are with 90-degree misaligned rotational axis and the magnetic field axis. Column density, Stokes Q and U, and polarization fraction maps of the models are shown. The streamlines on the column density maps show the direction of flows along the picture frame. The black lines over Stokes Q and U parameters depict the direction of magnetic field estimated from the polarization angles. 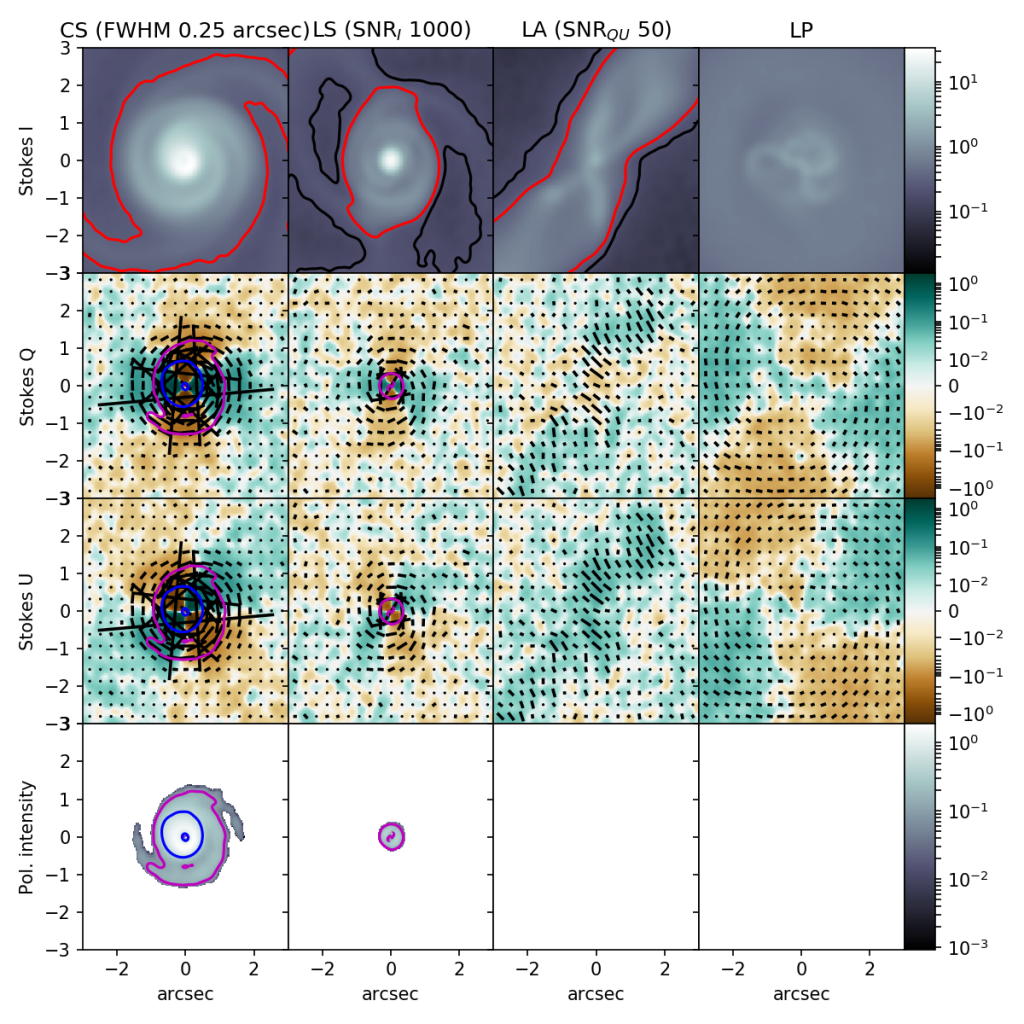 Synthetic images of the models, viewed from above, convolved with 0.25 arcsec FWHM and SNR ∼ 1000 and SNR ∼ 50 for Stokes I and Q/U respectively. The red contour shows the regions with 5σ detection and black with 3σ. The magenta and blue contours show where signal-to-noise of polarization fraction ≥ 1 and 4, respectively.