With the advent of high-resolution high-sensitivity observations, spiral patterns have been revealed around several asymptotic giant branch (AGB) stars. Such patterns can provide possible evidence for the existence of central binary stars embedded in outflowing circumstellar envelopes. Here, we suggest the viability of explaining the previously observed incomplete ring-like patterns with the spiral-shell structure as being due to the motion of (unknown) binary components viewed at an inclination with respect to the orbital plane. We describe a method of extracting such spiral shells from an incomplete ring-like pattern to place constraints on the characteristics of the central binary stars. The use of gas kinematics is essential in facilitating detailed modeling for the three-dimensional structure of the circumstellar pattern. We show that a hydrodynamic radiative transfer model can reproduce the structure of the HC3N molecular line emission of the extreme carbon star, CIT 6. This method can be applied to other sources in the AGB phase and to the outer ring-like patterns of pre-planetary nebulae for probing the existence of embedded binary stars, which are highly anticipated with future observations using the Atacama Large Millimeter/submillimeter Array. 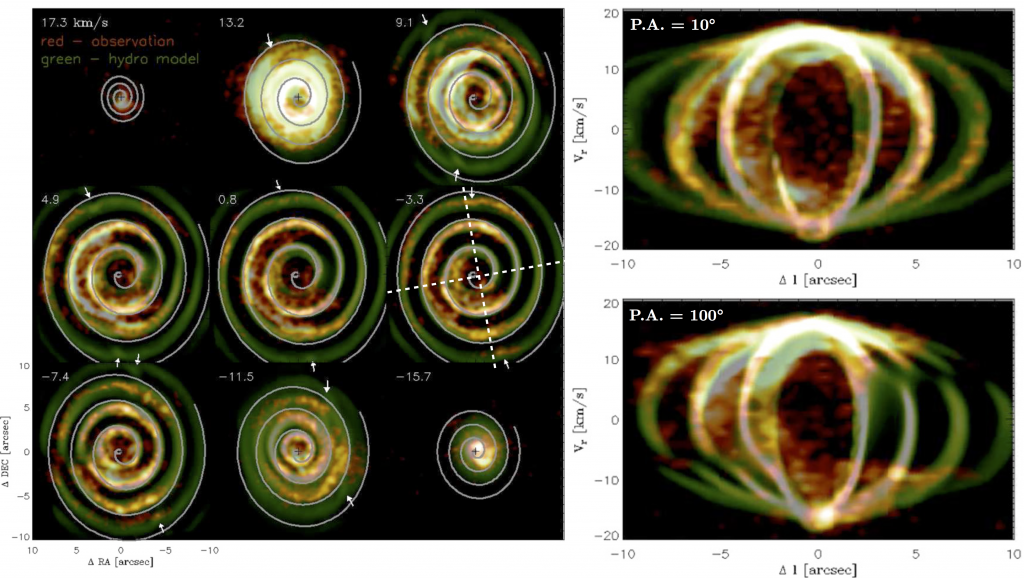 Left: Velocity channel images of the HC3N(4–3) line emission of CIT 6 observed with the VLA (red) and modeled by a hydrodynamic radiative transfer simulation using the FLASH and SPARX codes (green). North is up, and east is left. The position angles of the knots found in the hydrodynamic model are indicated by arrows. A simple geometric model with an inclined Archimedes spiral shell is shown by a gray solid line in each channel.

Right: Position–velocity diagrams of HC3N(4–3) line emission of CIT 6 along the position angle (P.A.) of 10° (top) and 100° (bottom), as indicated by the two dashed lines in the –3.3 km s–1 channel map. The major axis and minor axis correspond to 10° and 100°, and the relatively symmetric and the most asymmetric pattern, respectively. The radius along the major and minor axes, Δl, is measured from bottom to top and left to right, respectively.