Magnetic flux redistribution lies at the heart of the problem of star formation in dense cores of molecular clouds that are magnetized to a realistic level. If all of the magnetic flux of a typical core were to be dragged into the central star, the stellar field strength would be orders of magnitude higher than the observed values. This well-known magnetic flux problem can in principle be resolved through non-ideal MHD effects. Two-dimensional (axisymmetric) calculations have shown that ambipolar diffusion, in particular, can transport magnetic flux outward relative to matter, allowing material to enter the central object without dragging the field lines along. We show through simulations that such axisymmetric protostellar accretion flows are unstable in three dimensions to magnetic interchange instability in the azimuthal direction. The instability is driven by the magnetic flux redistributed from the matter that enters the central object. It typically starts to develop during the transition from the prestellar phase of star formation to the protostellar mass accretion phase. In the latter phase, the magnetic flux is transported outward mainly through advection by strongly magnetized low-density regions that expand against the collapsing inflow. The tussle between the gravity-driven infall and magnetically driven expansion leads to a highly filamentary inner accretion flow that is more disordered than previously envisioned. The efficient outward transport of magnetic flux by advection lowers the field strength at small radii, making the magnetic braking less efficient and the formation of rotationally supported disks easier in principle. However, we find no evidence for such disks in any of our rotating collapse simulations. We conclude that the inner protostellar accretion flow is shaped to a large extent by the flux redistribution-driven magnetic interchange instability. How disks form in such an environment is unclear. 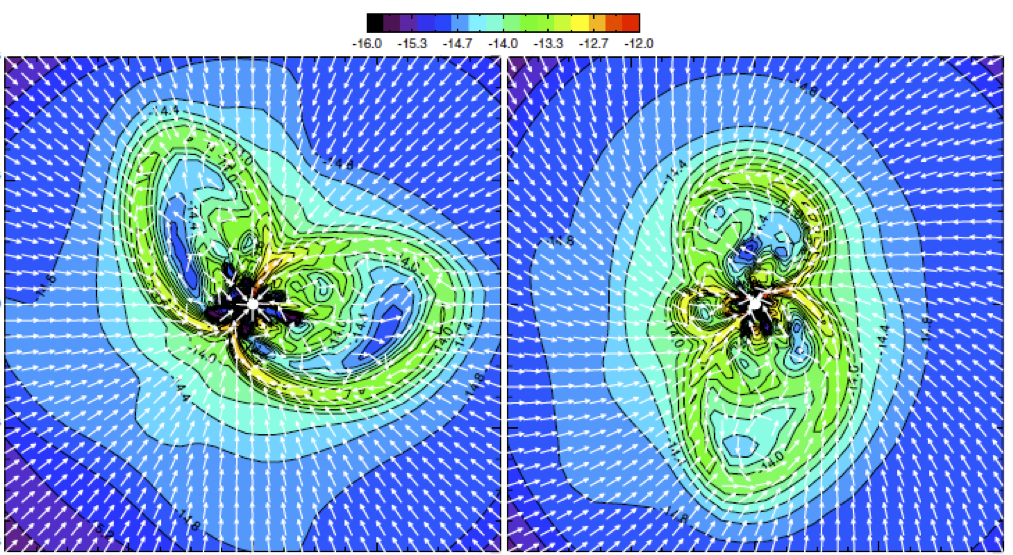 Distribution of the logarithm of the mass density ρ and velocity field (unit vectors) on the equatorial plane, for a non-rotating model (left panel) and a rotating one (right) that include both ambipolar diffusion and (enhanced) Ohmic dissipation for magnetic decoupling at small radii. Both models show filamentary structures in the inner protostellar accretion flow driven by magnetic interchange instability.