Stars form in dense cores of molecular clouds that are observed to be significantly magnetized. A dynamically important magnetic field presents a significant obstacle to the formation of protostellar disks. Recent studies have shown that magnetic braking is strong enough to suppress the formation of rotationally supported disks in the ideal MHD limit. Whether non-ideal MHD effects can enable disk formation remains unsettled.We carry out a first study on how disk formation in magnetic clouds is modified by the Hall effect, the least explored of the three non-ideal MHD effects in star formation (the other two being ambipolar diffusion and Ohmic dissipation). For illustrative purposes, we consider a simplified problem of a non-self-gravitating, magnetized envelope collapsing onto a central protostar of fixed mass. We find that the Hall effect can spin up the inner part of the collapsing flow to Keplerian speed, producing a rotationally supported disk. The disk is generated through a Hall-induced magnetic torque. Disk formation occurs even when the envelope is initially non-rotating, provided that the Hall coefficient is large enough. When the magnetic field orientation is flipped, the direction of disk rotation is reversed as well. The implication is that the Hall effect can in principle produce both regularly rotating and counter-rotating disks around protostars. The Hall coefficient expected in dense cores is about one order of magnitude smaller than that needed for efficient spin-up in these models. We conclude that the Hall effect is an important factor to consider in studying the angular momentum evolution of magnetized star formation in general and disk formation in particular. 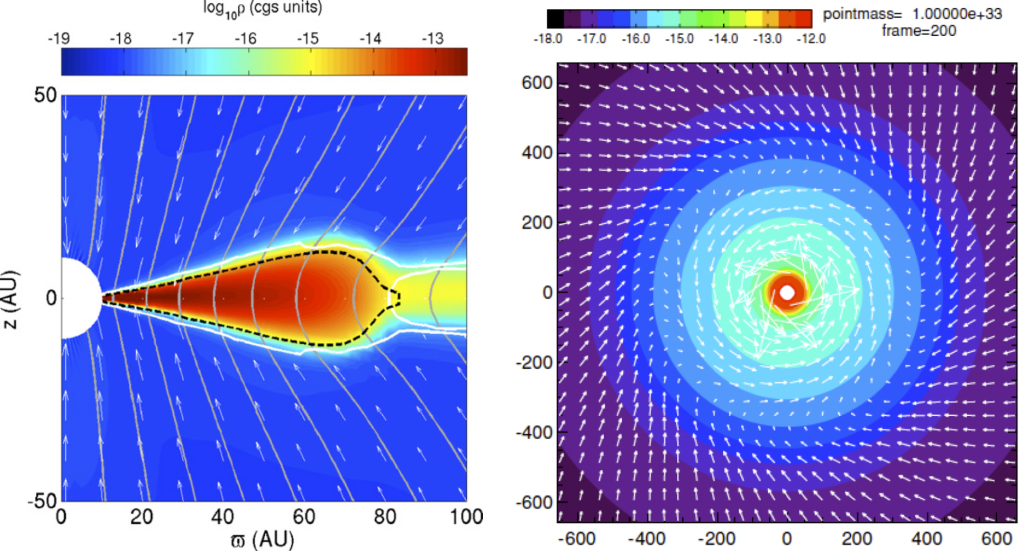 Snapshots of rotationally supported disks formed by introduced Hall effect in the MHD calculations, at a representative time of 2 x 1012 sec.

Left: the edge-on view of the case with rotational axis and magnetic axis being parallel. The poloidal velocity field is shown in white arrows and the magnetic field lines in gray solid lines. The white solid lines indicate the radial infall sonic transition at –0.2 km s–1. The thick black dashed line indicates the positions where the material is 90% Keplerian supported.

Right: the face-on view of the case with rotational axis and magnetic axis being anti-parallel. Note that the Hall effect forces the inner part to rotate in a direction opposite to that of the outer part.