Large-scale morphology and time evolution are investigated for the unified model of bipolar outflows outlined in Shang et al. (2006), where an outflow forms by a radially directed, wide-angle magnetized wind interacting with magnetized isothermal toroids in various quasistatic states. The primary wide-angle wind is toroidally magnetized and maintains a cylindrically stratified density profile, mimicking the asymptotic solution of the cold X-wind model. We explore the interplay between the toroidally magnetized primary wind and the surrounding toroids threaded by poloidal magnetic fields and examine how the jet and shell morphology and fine structures within them vary with the physical parameters. The variation in flatness of the density distribution in the ambient isothermal toroids helps shape the varieties of lobe morphology and collimation. The presence of a stronger ambient poloidal field helps shape the outflow, forming a magnetic cocoon and nested multilayered cavities surrounding the wind-filled lobe, which is most evident in the more open configurations of the ambient toroids. The wind–toroid interface is prone to substantial shear and thus unstable to the Kelvin–Helmholtz instability. Magnetic forces in the compressed toroidally magnetized high-velocity wind can generate vorticity, leading to nonlinear patterns within the extended magnetized mixing layers. Magnetic disturbances generated by the interplay could modulate lobe shapes, density, and velocities, giving rise to visual impressions of thicker and rugged shells and apparent episodic distribution of matter. The system maintains a quasi-self-similar evolution in time, which serves as a proxy for understanding the underlying physical mechanisms driving it. 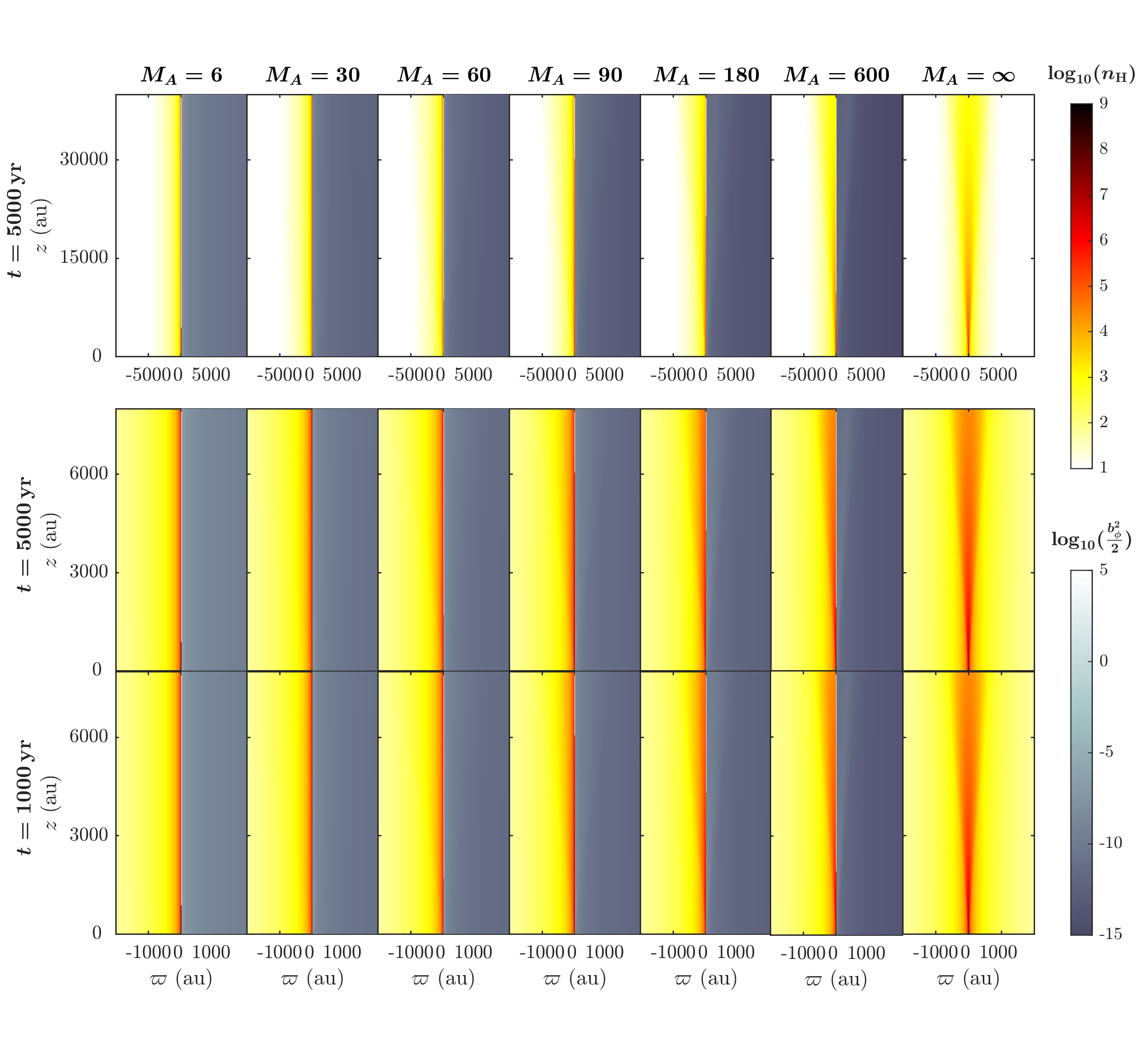 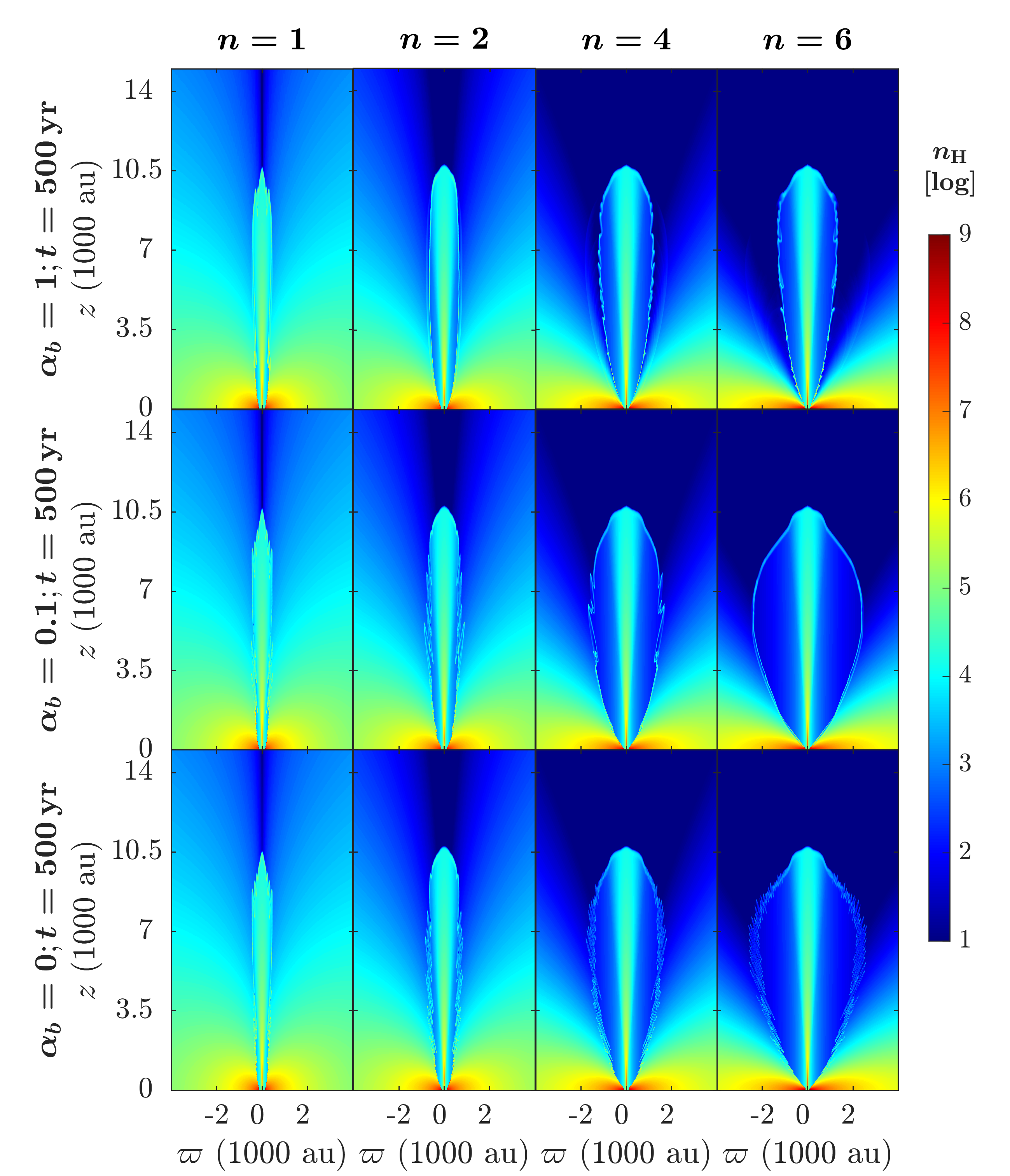 Density distribution of non-magnetized winds interacting with increasing magnetized ambient toroids from bottom to top with αb = 0, 0.1, and 1. The 500-year snapshots of outflows with a nominal wind velocity 100 km/s are shown. The non-magnetized wind and toroid interactions resemble the outflow lobe shapes described in the classical Shu et al. (1991) snow-plowed molecular outflows. 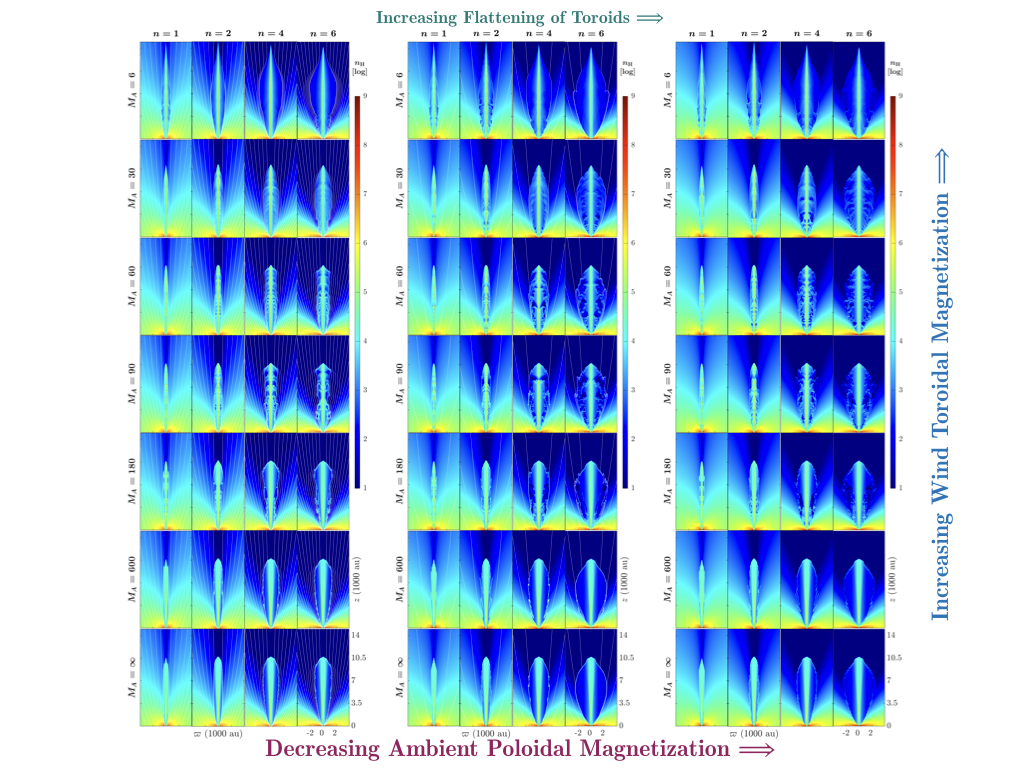 Volumetric number density distributions (logarithmically shown in units of cm-3) of the fiducial outflow cases at 500 years. The three main columns show decreasing degrees of ambient poloidal magnetization of αb = 1, 0.1, and 0. Within each column, the wind magnetization increase from bottom to top of MA = ∞, 600, 180, 90, 60, 30, and 6; ambient toroid opening increases from left to right of n = 1, 2, 4, and 6. 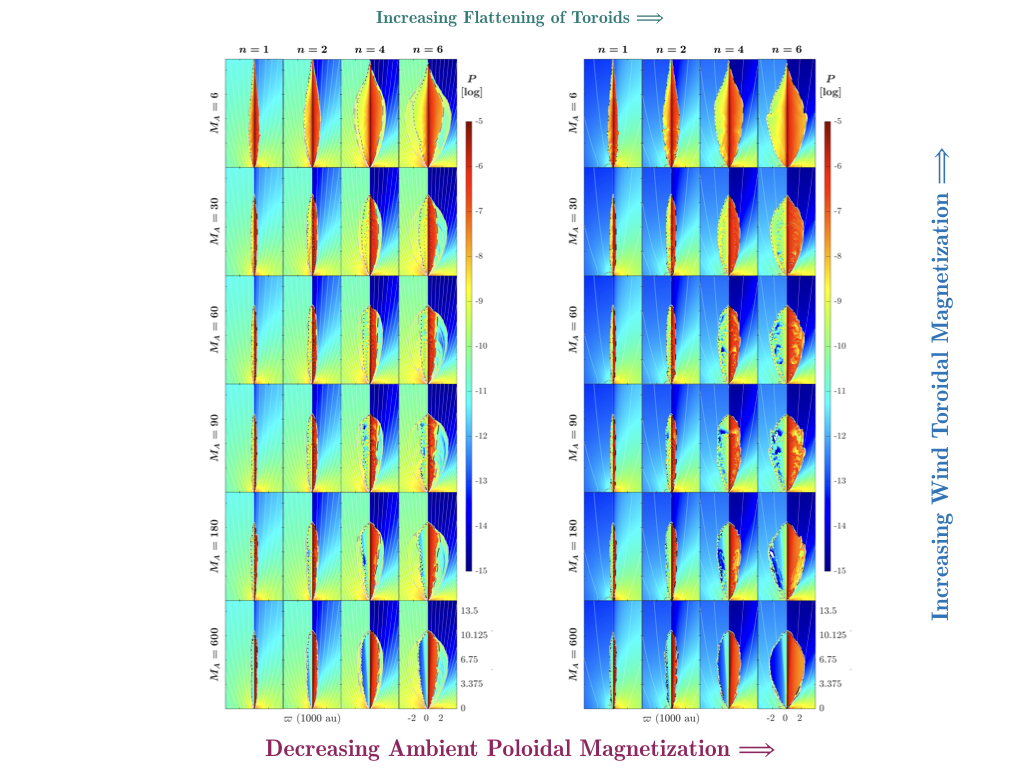 Distributions of total magnetic (poloidal + toroidal) pressure as left halves and ram + gas pressure as right halves of the outflow lobes (logarithmically shown in units of dyn/cm2) at 500 years. The two columns show decreasing degrees of ambient poloidal magnetization of αb = 1 and 0.1. Within each column, the wind magnetization increase from bottom to top of MA = 600, 180, 90, 60, 30, and 6; ambient toroid opening increases from left to right of n = 1, 2, 4, and 6. 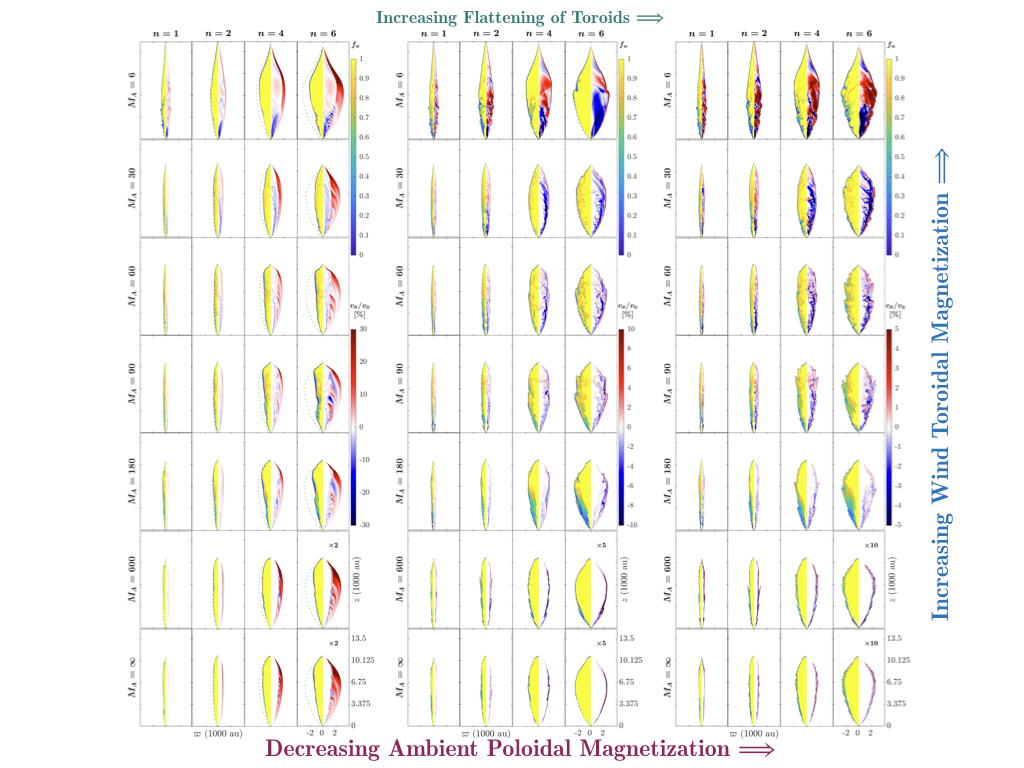 Structures of the magnetized and hydrodynamic mixing layers and spatial correlation with vθ for the fiducial outflow cases at 500 yr. The left halves of the panels consist of spatial variations of the wind mass fraction f and the right halves consist of vθ in percentage of the nominal free-wind speed v0. Outermost dotted contours of vr = aambient are tracing the outer boundaries of the magnetic cocoons in αb = 1 (left column) cases or the outermost shocked ambient shells in αb = 0.1 (center column) and αb = 0 (right column) cases. Within each column, the wind magnetization increase from bottom to top of MA = ∞, 600, 180, 90, 60, 30, and 6; ambient toroid opening increases from left to right of n = 1, 2, 4, and 6. 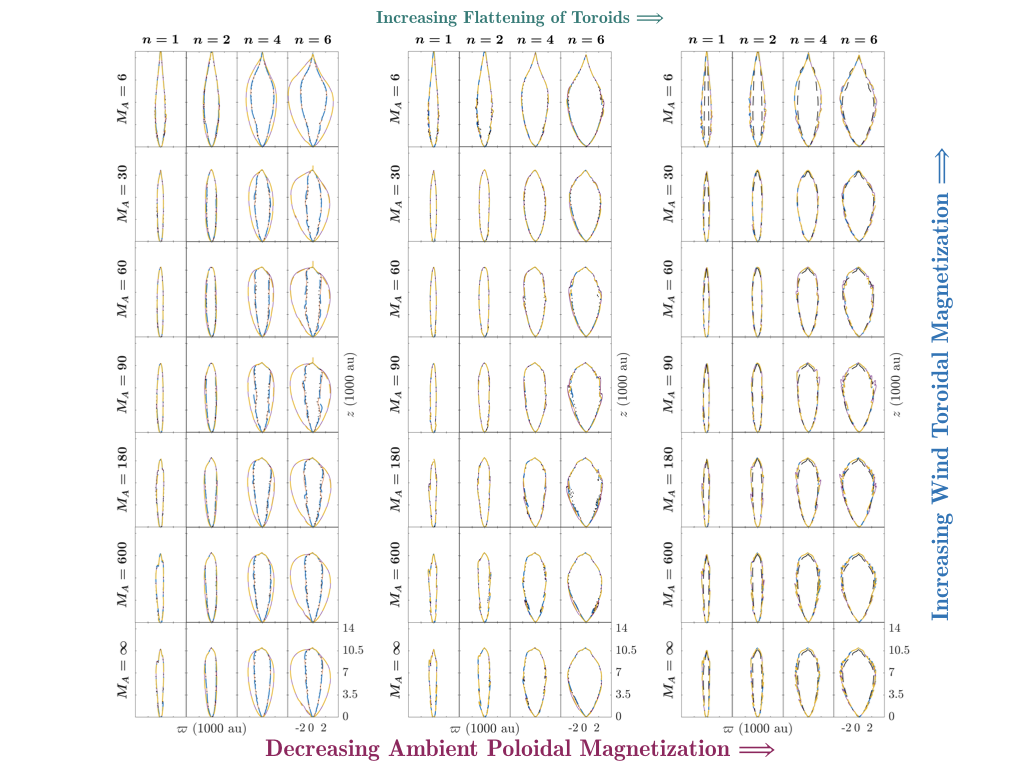 Synthetic observations in the form of column density: profiles produced by mixing structures in moderately magnetized (MA = 30, 60) winds of 100 km/s interacting with n = 1, 2, 4, 6 toroids of αb = 1, 0.1, and 0 at 500 years. For each αb, cases for MA = 30 are shown in the upper portion and those for MA = 60 are shown in the bottom. For each panel, the logarithmic density distribution is shown in units of cm-3 in the left halves, and the column density, including wind (free and compressed) and compressed ambient material by integrating vp > aambient regions, is shown logarithmically in the right halves in units of cm-2.