Radiative transfer may be the “last mile” to be achieved in order to compare with the observations. Dynamic solutions obtained from HD/MHD simulations require calculations of temperature and radiation field to produce synthetic images and spectra. Since relaxation timescale of the radiation is typically shorter than the dynamical timescale, the calculations of radiative transfer are often treated as post-processing calculations to mitigate difficulties that may be involved in the HD/MHD simulations.

Both line emission and continuum emission are important in understanding the physical properties of the system in interests. The opacity of the dust dominates the calculation of the temperature and continuum emission and/or absorption. The calculated temperature may serve as an input for detailed balance used in line intensity calculations. Currently, the line-emission radiative transfer tools have been developed and maintained, and dust radiative transfer tools are being developed.

Perspective is a post-processing ray-tracing radiative transfer package for calculating polarized thermal emission from dust at millimeter and sub-millimeter wavelengths. The dust grains are aligned along the magnetic field lines, as assumed in Fiege & Pudritz (2000). Given the magnetic field distribution obtained from magnetohydrodynamics (MHD) simulations, Stokes parameters (I, Q, U, V) and polarization degrees can be generated.

Stokes I, Q, U and polarization intensity seen on a scale of 3000 au (upper panels) and a zoomed-in scale of 300 au (lower panels), calculated by Perspective.
(Väisälä, Shang, Krasnopolsky, Liu, Lam, & Li 2019)

The code has been updated to be more adaptive to the current trends of parallel computing. FITS I/O has been implemented to allow a larger size of data for high-resolution simulation results. A state-of-art scalable random number generator designed for parallel computing (SPRNG) was adopted in the updated version for a better handle of randomness in separate parallel processes. An update is planned for better utilizing the memory in the code and for continuation of calculations from results of previous iterations.

SPARX stands for Simulation Packages for Astrophysical Radiative Xfer (Transfer). It is designed to calculate molecular excitation and radiative transfer of dust continuum and molecular line transitions in the millimeter and submillimeter wavelengths. It adopts the accelerated Monte Carlo algorithm developed by Hogerheijde & van der Tak (2000) and finds full non-local thermodynamical equilibrium (non-LTE) solutions of the molecular level population and radiation fields iteratively and consistently. Instead of assuming that molecular excitation is simply in equilibrium corresponding to the local temperature, non-LTE demands only statistical equilibrium of the level population through collisional and radiative excitation and de-excitation processes, which can be solved with a detailed balance equation.

As a post-processing tool, SPARX requires inputs of molecular gas density, temperature, and velocity, which can be provided by the results of a hydrodynamic simulation, as well as line width distribution. Knowledge of the molecular abundance distribution and parameters such as dipole moments, line frequencies, and collisional rates are also required by SPARX. The final SPARX output includes synthetic images, which can be used to generate spectra and position–velocity diagrams, as input for a telescope filter for simulated observations or for other scientific analysis.

Currently, SPARX can take 1D (spherically symmetric), 2D (axisymmetric), and 3D (Cartesian nested-grid, spherical, cylindrical) density, velocity, and temperature structures. It can be parallelized in calculating the accelerated Monte Carlo algorithm. Below is an example of the input spherically symmetric Shu (1977) inside-out collapse model, the subsequent molecular population and emissivity, and the resulting channel maps and line profiles. For more information and detailed descriptions please refer to the SPARX page. 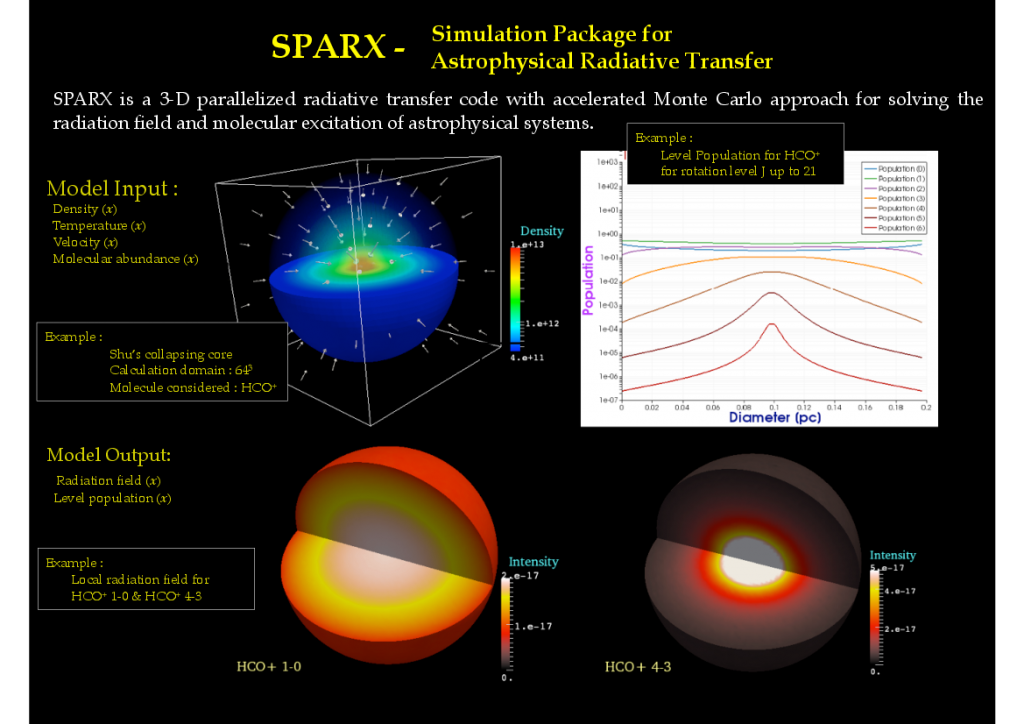 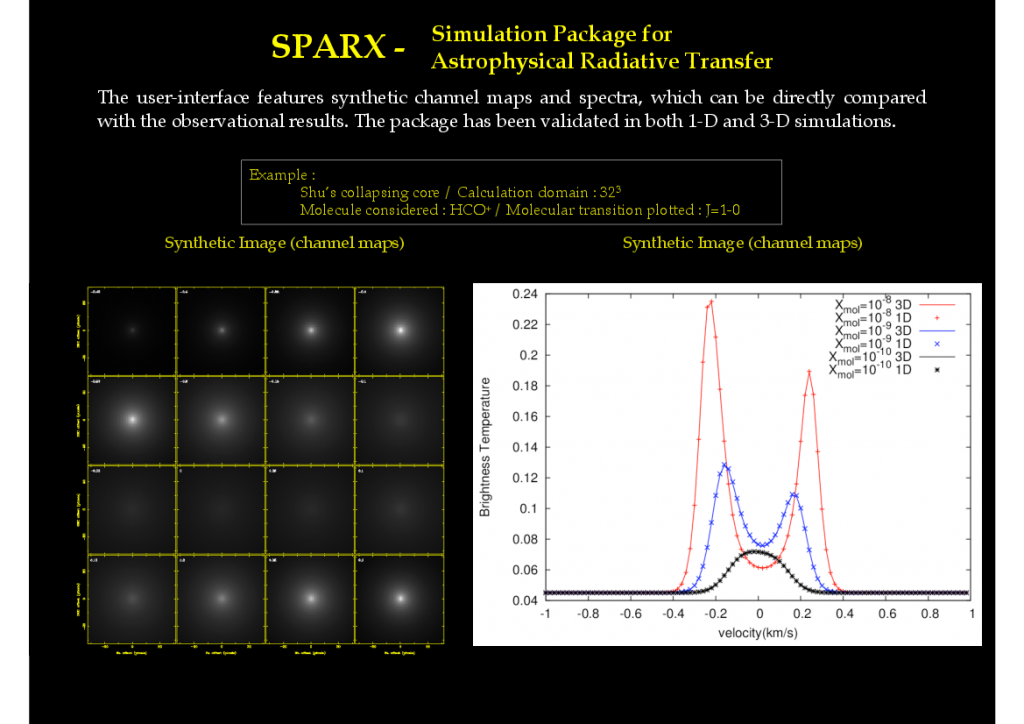 Synline is a package for producing synthetic line emission spectroimaging cubes and maps. Density, velocity, and temperature resulting from simulations are required for solving the level population under LTE condition and applying thermal width in each cell. Given the viewing inclination angle and velocity bin resolution, line-of-sight integration is then performed to obtain position–position–velocity data cubes of column density and/or emissivity of specified molecular transitions. Currently, Synline takes on 2D axisymmetric simulation results. In producing the data cubes, remapping from 2D spherical coordinates and regridding into 3D Cartesian coordinates are performed. Subsequent synthetic position–velocity diagrams, channel maps, and integrated moment-0 maps can be obtained from integrating through various dimensions of the data cubes.

Perspective was used to produce synthetic Stokes parameters and polarization fraction based on rotation–magnetic-field misaligned models produced by ZeusTW. The process of misaligned collapse produces spiral structure, precessing pseudodisk, and structures that can only be obviously seen in a time-evolution manner. The gas makes strongly eccentric and approximately elliptical orbits during its infall. These infalling elliptical orbits constitute an inspiraling motion. These eccentric orbits are not exactly Keplerian. Self-gravity is presumably the cause of the observed precession of the periastron, and visualizations show that it can exert torques.

Hochunk3d was used to produce synthetic sub-millimeter (sub-mm) and near-infrared (NIR) images to be compared with images of the disk of the Herbig Ae Star MWC 758, obtained by ALMA and VLT/SPHERE. The two previously known dust emission clumps are resolved in both the radial and azimuthal directions, with radial widths equal to ~4× the local scale height. Only one of the two spiral arms previously imaged in NIR scattered light is revealed in ALMA dust emission, at a slightly larger stellocentric distance owing to projection effects.

SPARX was used to produce synthetic HC3N (4–3) data cube from hydrodynamic FLASH simulations and compare with the VLA observations of CIT 6 from Claussen et al. (2011). Observed features were well reproduced in the synthetic channel maps and position–velocity diagrams based on a spiral–shell structure induced by the companion of the AGB star.

Synline was used to produce synthetic position–velocity diagrams and integrated column density from 2D axisymmetric ZeusTW simulations based on Shang et al. (2020), spanning a large parameter space of wind and ambient magnetizations. Kinematic features in the outflow lobes, such as the base of the wide-angle wind, cylindrically collimated jet, compressed wind cavity, magnetic pulses, multicavities and multiple shells, were well characterized in the synthetic column-density-based position–velocity diagrams and integrated maps. Effects of toroid flattening and wind/ambient magnetic interplay is also evident.