Numerical simulations of hydrodynamics (HD) and magnetohydrodynamics (MHD) are an important part of the CHARMS project. We develop, maintain, and utilize (M)HD codes for this purpose, such as ZeusTW (a locally developed MPI-parallel version of Zeus3D, able to do non-ideal MHD, tuned to study various problems in jet, disk and star formation, detailed below), local versions of Zeus2D (tuned for the study of jets and outflows, see, e.g., Shang et al. 2006), and Pluto (currently utilized with problem sets prepared to study outflows and magnetic reconnections, see, e.g., Čemeljić & Huang 2014).

ZeusTW can solve MHD/HD equations in Cartesian, spherical, and cylindrical coordinates with a variety of equations of states, including isothermal, adiabatic, and polytropic. A Poisson solver for self-gravity is included. Recent development includes locally isothermal equations of states on a tracer field, a viscosity module, and a simple Bremsstrahlung cooling module. 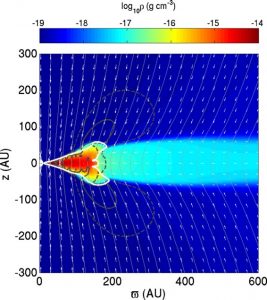 To treat the ohmic term relevant for this paper, we used a resistivity algorithm based on Fleming et al. (2000), which includes subcycling. We tested the code by diffusing an initial Gaussian profile in Cartesian geometry, in one, two, and three dimensions. We also tested slightly different forms of the algorithm (such as changing the operator splitting by calculating the current density J before or after the magnetic field B is updated), and different subcycling prescriptions (such as varying the maximum number of ohmic subcycles from 1 to 100). The code passed all of these tests.

The most resistive model (as in the figure) differs drastically from the lower resistivity cases and produces a rotationally-supported disk (RSD) of radius ~150 AU at the representative time t = 1012 s. The disk has a mass ~0.01 M☉ at t = 1012 s, corresponding to an average accretion rate (from the envelope to the disk) ~5 × 10−7 M☉ yr−1. 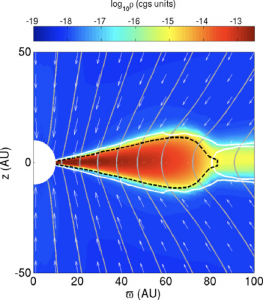 Snapshot of the RSD formed through Hall effect in the meridian plane at t = 2 × 1012 s.

The Hall term in the induction equation is treated using an explicit method based on Sano & Stone (2002) and Huba (2003), which includes subcycling to speed up the computation.

Including a Hall term with a coefficient Q ≳ 3 × 1020 cm2 s−1 G−1 in the induction equation enables an RSD of radius ≳ 10 AU to form. The RSD is formed not because the Hall effect has reduced the efficiency of the magnetic braking; rather, it is produced because the Hall effect actively spins up the inner part of the equatorial material to Keplerian speed. The spin-up comes about because the collapsing envelope drags the magnetic field into a highly pinched configuration near the equator, producing a large toroidal electric current density, which forces the field lines to rotate differentially due to the Hall effect. The resulting twist of field lines yields the magnetic torque that spins up the equatorial material, even in the absence of any initial rotation. When the magnetic field orientation is flipped, the direction of disk rotation is reversed as well. The implication is that the Hall effect can in principle produce both regularly rotating and counter-rotating disks around protostars. 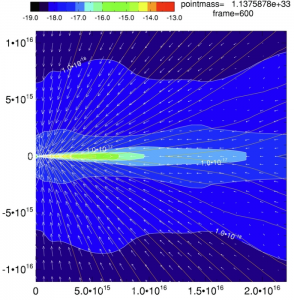 Ambipolar diffusion (AD) is treated using the explicit method described in Mac Low et al. (1995), as in Mellon & Li (2009). The magnetic field is evolved using a velocity that is the sum of the bulk neutral velocity v and an ion-neutral “drift” velocity ΔvAD.

The equatorial infall is initially slowed down near a relatively large radius. It corresponds to the edge of the magnetic bubble inflated by magnetic braking, where a magnetic barrier forces the collapsing material over a large solid angle into a narrow equatorial channel. Upon passing through the barrier, the material resumes rapid radial infall, spinning up as it collapses, until a second barrier is encountered. This second barrier is induced by AD, which enables the magnetic field lines to decouple from matter and pile up outside the central object as the matter accretes onto the protostar. The piled-up magnetic field drives a C-shock, slowing down the accretion flow to a subsonic speed. The slowdown of infall leads to a high density in the post-shock region. Upon passing through the shock, the equatorial material re-accelerates toward the central object, reaching a highly supersonic infall speed at small radii.

Based on the unified wind model of Shang et al. (2006), kinematics and structures of molecular outflows from low-mass young stars are studied with various levels of magnetization and temperature of the outflows propagating into a cold isothermal toroid. Toroidal field pinches and collimates the inner part of the outflow into axially concentrated jet, while higher temperature along with lower field strength operates the opposite. Moreover, the poloidal field in the toroid helps to prevent corrugation in wind-ambient interaction regions and produces a thicker swept-up shell. Synthetic properties of protostellar outflows in the youngest phases are investigated by the two-temperature unified outflow models with toroidal and poloidal fields including mass–velocity profiles, position–velocity profiles, intensity–velocity profiles of important molecular lines from CO and SiO. The Class 0 source IRAS 04166+2706, as an archetypical case of possessing molecular jets and outflows in CO and SiO, serves as a case study of the ejection history under the framework of the unified wind model.

Disk formation in magnetized cloud cores is largely hindered by magnetic braking. Additional effects are needed to weaken the magnetic braking and enable the formation of persistent, rotationally supported, protostellar disks. A series of papers were published to investigate the effects of non-ideal MHD effects, including the first attempts to investigate the effect of enhanced ohmic dissipation and that of the Hall effect. Besides non-ideal MHD effects, the misalignment between the magnetic field axis and rotational axis may help to form a rotationally supported disk. Moreover, turbulence can be an important way to bypass the magnetic breaking catastrophe by inducing magnetic reconnections and thus reducing the magnetic flux threading the collapsing cloud core. An alternative interpretation is advanced, based on magnetic decoupling-triggered reconnection of severely pinched field lines close to the central protostar and turbulence-induced warping of the pseudodisk.

State-of-the-art observational facilities are providing increasingly stringent constraints on the physical properties of circumstellar discs. Specifically, the Atacama Large Millimeter/submillimeter Array (ALMA) has shown that a large number of circumstellar discs have detailed radial and azimuthal substructures. How the various observed structures form remains undetermined, though a number of promising physical mechanisms have been proposed. Previous axisymmetric investigations in two dimensions (2D) have shown that rings and gaps develop naturally in non-ideal magnetohydrodynamic disc–wind systems, especially in the presence of ambipolar diffusion. These 2D simulations were extended to three dimensions (3D) and the rings and gaps are still formed in the presence of a moderately strong ambipolar diffusion from the same basic mechanism that was identified in the 2D simulations, namely, the redistribution of the poloidal magnetic flux relative to the disc material as a result of the reconnection of a sharply pinched poloidal magnetic field lines. As the ambipolar diffusivity decreases, both the disc and the wind become increasingly turbulent, driven by the magnetorotational instability, with tightly wound spiral arms becoming more prominent in the disc.