Preplanetary nebulae (pPNe) and planetary nebulae (PNe) are evolved, mass-losing stellar objects that show a wide variety of morphologies. Many of these nebulae consist of outer structures that are nearly spherical (spiral/shell/arc/halo) and inner structures that are highly asymmetric (bipolar/multipolar). The coexistence of such geometrically distinct structures is enigmatic because it hints at the simultaneous presence of both wide and close binary interactions, a phenomenon that has been attributed to stellar binary systems with eccentric orbits. Here we report new high-resolution molecular-line ALMA observations of the circumstellar spiral-shell pattern of AFGL 3068, an asymptotic giant branch (AGB) star transitioning to the pPN phase. The observations clearly reveal that the dynamics of the mass loss is influenced by the presence of an eccentric-orbit binary. This quintessential object opens a new window on the nature of deeply embedded binary stars through the circumstellar spiral-shell patterns that reside at distances of several thousand Astronomical Units (au) from the stars. 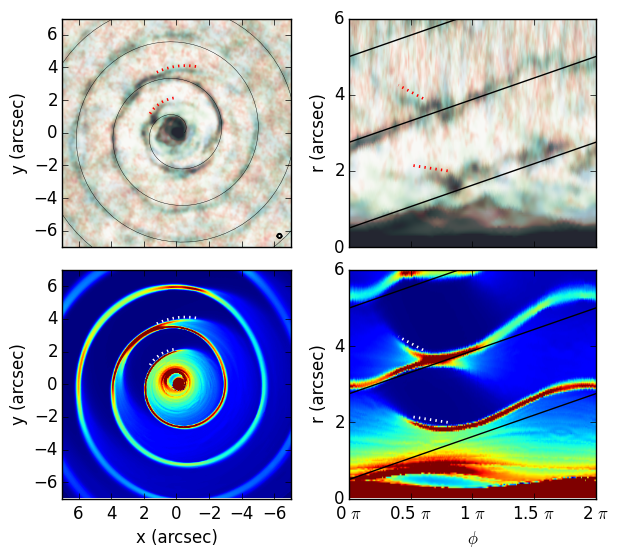 Bifurcation and undulation of AFGL 3068, and an eccentric binary model. Comparison between (upper panels) the observed molecular line intensity at the systemic velocity and (lower panels) the corresponding gas mass distribution within the same velocity range in a hydrodynamic model employing an eccentric binary with an eccentricity of 0.8 and an inclination angle of 50◦ for the orbital plane with respect to the plane of the sky. A straight line (rarcsec = 0.5 + 9 φ/8π) is inserted to guide the eyes to an Archimedean spiral, expected for a binary system in a circular orbit with the orbital plane located exactly on the plane of the sky. The features related to the bifurcation at two innermost windings of the spiral are marked by dotted lines (in red for the observational data, and in white for the model). The synthesized beam size of the ALMA observations is denoted as an ellipse at the bottom right side of the first panel.