The kinematics and morphologies of molecular outflows from low-mass young stars are explored by magnetohydrodynamic simulations in the context of the unified wind model (Shang et al. 2006) which has provided a natural explanation of high-velocity jet and low-velocity shell features. In this work, we investigate how these characteristics are affected by the underlying physics of temperature and magnetic field strength. Such knowledge may help us understand the rich morphologies and kinematics of molecular outflows. We study the problem of a warm wind running into a cold ambient toroid by using a tracer field that keeps track of the wind material. While an isothermal equation of state is adopted, the effective temperature is determined locally based on the wind mass fraction. In the unified wind model, the density of the wind is cylindrically stratified and highly concentrated toward the outflow axis. Our simulations show that for a sufficiently magnetized wind, the jet identity can be well maintained even at high temperatures. However, for a high-temperature wind with low magnetization, the thermal pressure of the wind gas can drive material away from the axis, making the jet less collimated as it propagates. We also study the role of the poloidal magnetic field of the toroid. It is shown that the wind-ambient interface becomes more resistant to corrugation when the poloidal field is present, and the poloidal field that bunches up within the toroid prevent the swept-up material from being compressed into a thin layer. This suggests that the ambient poloidal field may play a role in producing a smoother and thicker swept-up shell structure in the molecular outflow. 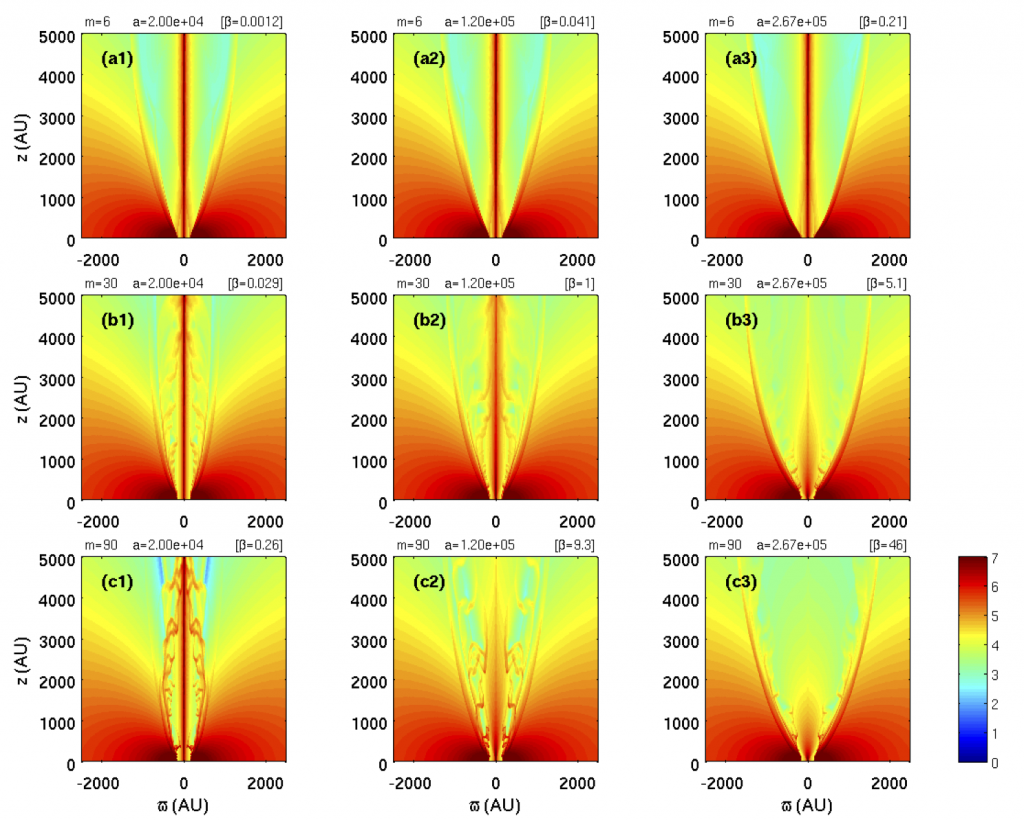 Effects of temperature and magnetization on molecular outflows: the structure of the base of outflows at 1000 yr is shown with different physical conditions. Panels (a) to (c) shows the Alfvénic Mach number from 6, 30, to 90 [decreasing magnetic field strength]; and (1) to (3) shows the wind temperature from 10 K, 400 K, to 2000 K [increasing wind temperature]. These corresponds to different plasma beta parameter (βplasma ≣ 8πa2ρ/B2) from 0.001 to 46. The central axial jet is less collimated and the shell structure is widened when βplasma increases. In these cases, the poloidal magnetic field in the toroid is included. 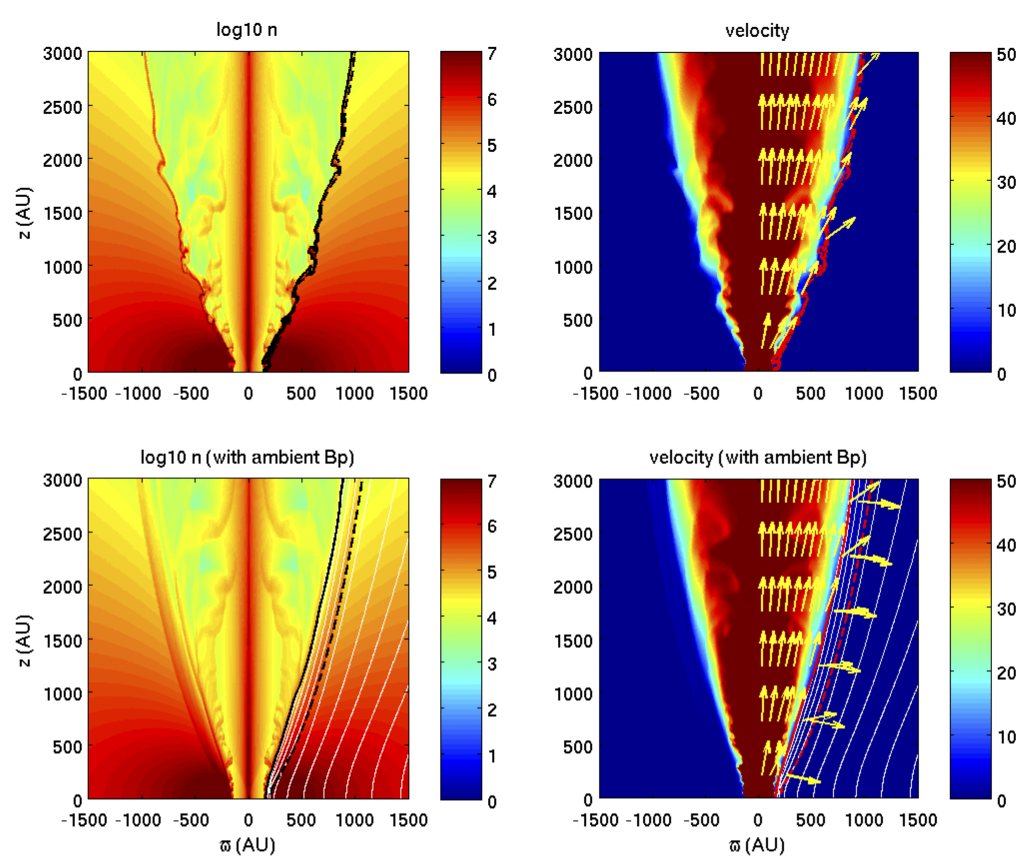 Effects of poloidal magnetic field on molecular outflows: density (left) and velocity (right) snapshots at 1000 yr with poloidal field ignored (upper panels) and included (lower panels) are compared. The model with wind temperature 400 K (sound speed a = 1.2 × 105 cm s–1) and Alfvénic Mach number 30 is shown. The thick solid line marks the regions in which the wind mass fraction is 1%, and the thick dashed line indicates the regions in which the bulk velocities equal the ambient sound speed (a = 2.4 × 104 cm s–1). A clear modification of the morphology and thickness of the swept-up shell is seen when ambient poloidal field is included.

A Two-temperature model of magnetized protostellar outflows are produced in ZeusTW by assigning different sound speeds in the ambient toroid regions and wind regions, the latter being described by a wind tracer field. The animations show the time evolution of a toroidally magnetized outflow (Shang et al. 2006) moving into a singular isothermal toroid (Li & Shu 1996) without (left animation) or with (right animation) a prescribed poloidal magnetic field, respectively. The left panel in each animation shows the density distribution in color scales and poloidal field lines in white contour. The right panel shows the distribution of wind fraction. The fraction is 1 for material injected from the central wind boundary and 0 for material from the ambient toroid. Extra white thick contours indicate fractions of 0.01 and 0.99, and mixing layers form at the boundary of wind and ambient.